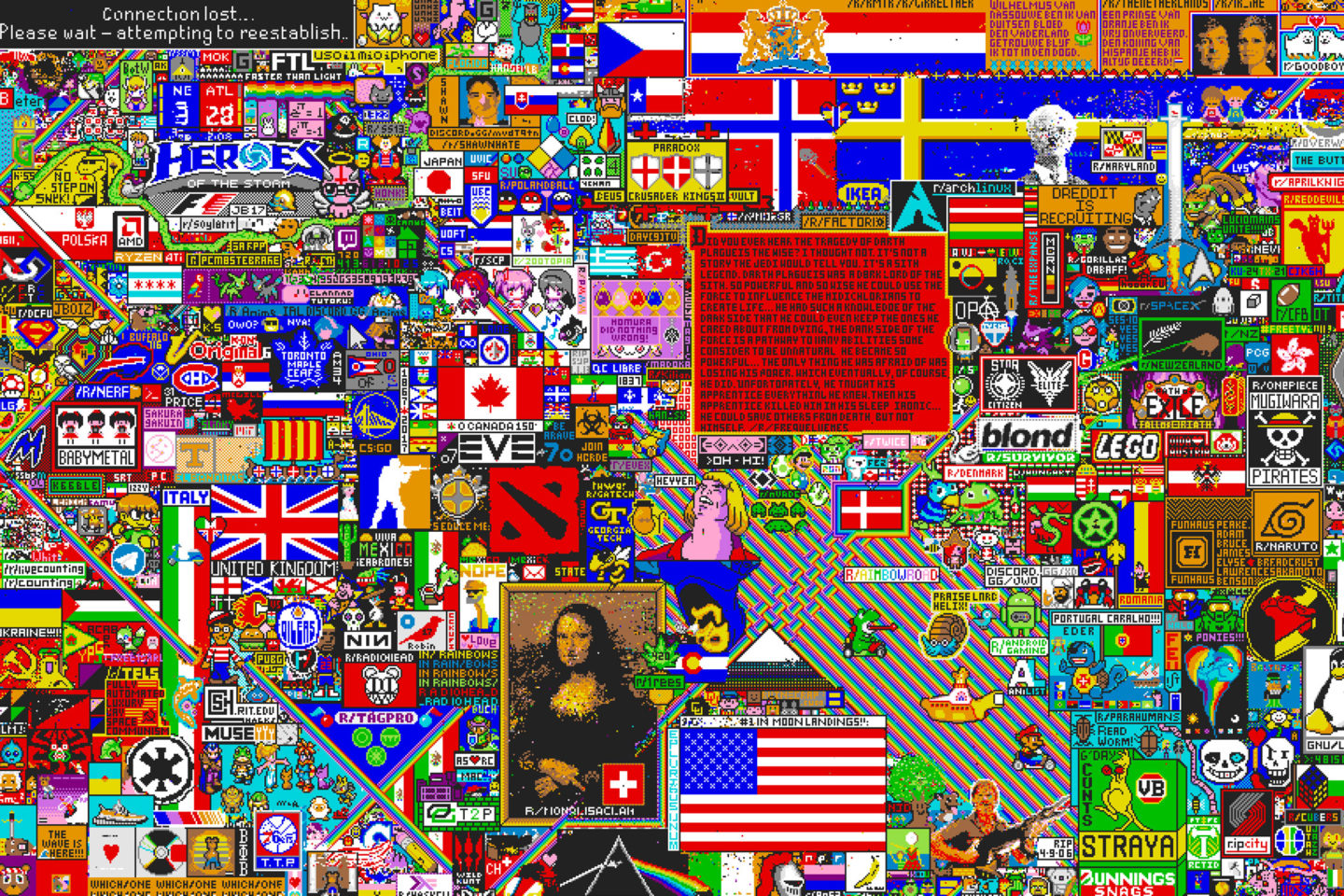 For April Fool's Day in 2017, Reddit gave their users the opportunity to paint on an open web canvas, one pixel at a time.

According to one 2015 study, there are 1.8 billion gamers around the globe. At a time when traditional mass media is struggling to stay afloat, eSports — professional competitive gaming — is one of the fastest growing spectator markets in the world. The tremendous compute power of gaming PCs make them great for mining cryptocurrency. Politically influential movements have deep ties to gamer communities, and gamer culture exerts a powerful influence on online culture as a whole. Given our near-constant connection to the internet, it behooves all of us to take an interest in games, how they work, and how they fail.

“Games are sites for cultural innovation — safe spaces in which people feel freer to experiment and express themselves in new ways,” writes Edward Castronova, an economist and games scholar. “People who make Internet games therefore have the power to change our cultural world.”

Why we can’t have nice things

Every so often there is an event that perfectly embodies its era, and points a fateful finger in the direction of things to come. In May 2005 the internet witnessed such an event when a video called “UBRS (vid) Rookery Overpowered! blue plz.” appeared online for the first time.

The video shows a guild of players in the popular MMORPG “World of Warcraft” devising a complex strategy to get through a particularly harrowing dungeon. The plan is ruined when one player leaps headlong into battle, yelling his own name: “Leeroy Jenkins!!!”

Every game is a kind of social contract, but it can be difficult to maintain a strong social contract online, where there are weaker social bonds and the community is transient.”

This prank became one of the earliest and most enduring viral memes on the internet. Everyone can relate to the emotions it expresses: the sheer exuberance of breaking protocol, and the frustration of the people who have to rebuild from the rubble of broken rules.

At its core, the video expresses a dilemma every society must confront — how to balance autonomy and freedom against the need for law and order. Away-from-keyboard communities tend to have overlapping, redundant systems in place to do this. The laws of the land can’t cover every possible scenario, which is why social protocol is decentralized. Individuals are expected to carry within themselves all of the conventions, mores, norms, etiquette, etc. that regulate behavior and make daily life run smoothly.

But in the world of online games — and online more broadly — social protocol does not always prevail.

“Every game is a kind of social contract, where players agree to follow the rules and to uphold the spirit of the game,” says Eric Zimmerman, game designer and professor at NYU’s Game Center. “However, it can be difficult to maintain a strong social contract in an online environment where there are weaker social bonds and the community is transient.”

You down with TTP?

On the other end of the spectrum from the gleeful buffoonery of Leeroy Jenkins, there are some gamer communities for whom finding transgressive new ways to exploit systems is a game itself. Nothing exemplifies this mentality better than the Rabelaisian phrase “time to penis,” which refers to the amount of time it takes users to draw a phallus in a new game.

TTP measures both the emotional maturity of a game’s players, and the degree of freedom the system affords its users — the idea being that if players don’t use the game to make that rudimentary shape, the game is either too constrictive or not engaging enough.

“Mastering the mechanic of a game in order to achieve a goal always means people find enough enjoyment in the game to learn it as a system,” says 16 year old gamer Tristan Winger-Bearskin. “If [the way they demonstrate mastery] happens to be to draw a giant ween, so be it.”

The intentions that the designers carry into the mechanics of a game don’t mean much when it comes to the end product.”

Not everyone agrees. “In my opinion it’s more of a cynical measure of how toxic/juvenile the internet is,” says game designer Clayton Chan. While he does not condone the practice, Chan recognizes it as an indelible part of the culture. “Abuse comes in many forms. Hacks, spam, griefing, trolling, exploits… people are going to find a way to draw that dick, you know?”

The bigger a system scales, the more ironclad Murphy’s Law becomes. On platforms the size of the most popular games — or social media sites, or blockchains — if something can go wrong, it will. Nothing will save the system but the system itself.

As a concept TTP is somewhere on the slippery slope between adolescent prankishness and actual abuse. It doesn’t take an overabundance of imagination to see how this sensibility can spill over into other aspects of public discourse.

“I would define abuse as a violation of consent,” says Robert Yang, a game designer who also teaches at the NYU Game Center. “When we play games, we enter into a ‘magic circle’ where we consent to certain behaviors and interactions. When player behavior is outside the scope of those boundaries and you do not consent to it, then it is probably a form of player abuse.”

Are game designers responsible for the abuse that takes place in the systems they create? It’s a delicate question. On the one hand, it’s the players — not the designers — who are using the games in ways they were never intended to be used. To keep the game playable fun, designers have to keep some parts of it open and unregulated. “Every systematic step you take to combat abuse is also an obstacle you place on player freedom,” says Chan.

On the other hand, players who engage with games in this way are only doing what the system allows. “The intentions that the designers carry into the mechanics of a game, how they intended systems to work, don’t mean much when it comes to the end product,” Winger-Bearskin explains. “While I do think it’s important for these systems to attempt to be as fool-proof as possible, tech, exploits, and other things that come from a deep understanding of the mechanics are always going to pop up, and should be encouraged.”

Gaming culture’s unstable marriage between systems thinking and adolescent anti-authoritarianism is already making its mark on our world. There are echos of this attitude wherever there is power — politics, business, technology. Meanwhile the old institutions that once enforced social protocol are less influential than they have ever been. In their place, an immense network of systems.

With no central authority to control their members, decentralized systems have to account for the possibility of abuse and exploitation in the way they are designed. For this reason privacy and security concerns are even more pressing in decentralized systems than they are in systems operated by trusted third parties; the more people have the ability to act autonomously, the greater the chance that someone will jump the gun, shout their name, and ruin the game for everybody. Decentralized systems have to build the rules of engagement into the protocols that run them; the system doesn’t just enforce the law, it is the law.

We live in a world of systems. These systems don’t maintain order, so much as they replace it. Increasingly automated, algorithmic, and analyzable, our systems reward those who can best game them. Video games attest to the great irony of this situation, which is that success accrues to two kinds of players: those who understand the game even better than its makers do, and those who understand it not at all.

View all posts by In the Mesh Staff