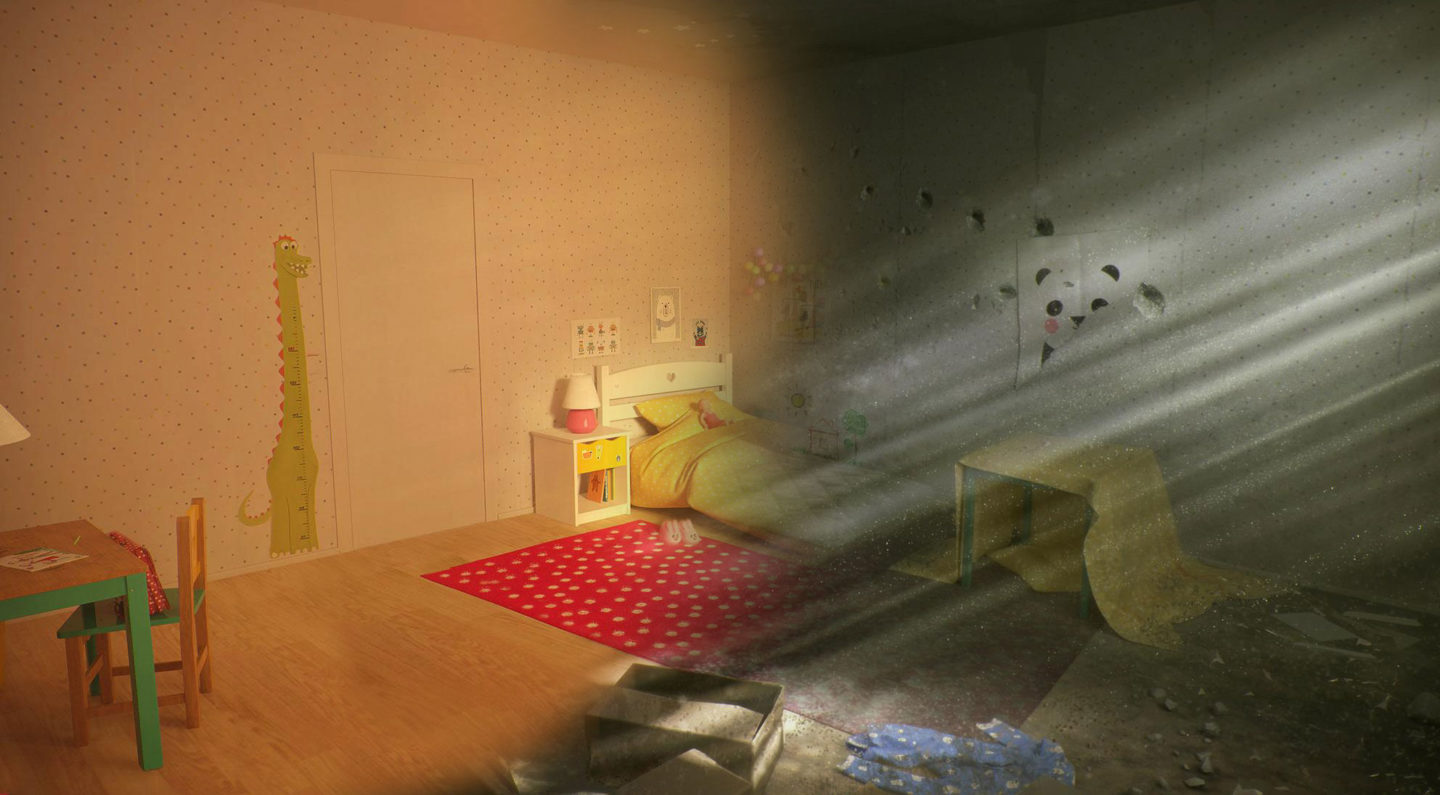 "Enter The Room" shows the dark transformations that a child's bedroom undergoes over the course of a prolonged armed conflict.

Dating back to 1864, the International Committee of the Red Cross (ICRC) is the world’s oldest humanitarian organization. Their mandate has always been to protect and assist victims of war and armed conflict, and to promote respect for international humanitarian law. Today, the ICRC is active in over 80 countries.

Ariel Rubin is ICRC’s Head of Digital Content. Earlier this year, he and his team released “Enter The Room,” an augmented reality experience that portrays the traumatic effect that urban warfare has on its victims, all without depicting a single human. Instead, “Enter The Room” puts the viewer within a child’s bedroom that just happens to be within a war zone, and shows the tragic ways the room changes as the war outside rages on year after year. The app has received widespread acclaim for its inventive narrative approach and its emotionally resonant use of AR technology.

We talked with Rubin about immersive media, storytelling, and the potential for AR to decentralize humanitarian work.

The following interview has been edited for clarity and length.

Eamon O’Connor: Was “Enter The Room” inspired by any particular conflicts?

Ariel Rubin: Syria was kind of the big one for us, although the urban battles taking place in Iraq and Yemen were also significant. We’re doing something right now in VR on the same kind of issue – “What happens when war comes home?” That’s what we’re interested in.

The ICRC acts as the guardian of international law. We’re interested in the impact of war and conflict on civilians. Are the rules of war being followed? Are civilians being targeted? These are the issues that we as an organization have been interested for over 150 years. So today, with conflict that is so brutal in these densely populated areas, it’s something we are trying to bring attention to.

The idea with this piece was we wanted it to be your bedroom.”

E: What made you decide to make “Enter the Room” in augmented reality?

A: We have been looking into potential augmented and virtual reality experiences for some time. About a year ago I was on my phone, on Twitter, just scrolling through the hashtag “#madewithARkit.” I got stuck on this one little video that this company called Nedd had posted. It was a guy on the street in Paris; he held up his phone and a portal appeared. He walked through it, and entered this really rad, really wild jungle. Super colorful and beautiful and crazy.

This was before [AR] was widely available for use on phones. I emailed the company and asked if they would be interested in collaborating with the ICRC. We asked them, “Could you do this, but in a child’s bedroom in Syria? That’s the concept.”

E: The room itself doesn’t have many specific cultural signifiers. Was that intentional?

A: That’s right. Totally intentional. It’s so generic, it could be anyone’s room. It allows you to input your own feelings and memories and ideas. It’s funny, I’ve shown this to different people — one of my colleagues is from Russia, and she said, “I had the same garbage pail as a kid in my room.” I showed it to a friend who lives in Damascus, and he was like, “Not far off from what my room was like.”

Often with these kinds of apps, they try to “take you there”, to take you to this foreign or exotic place. The idea with this piece was we wanted it to be your bedroom. The target audience was not people who have experienced [urban warfare], but people who have never experienced it. And we wanted to give them a sense of that. By making it your bedroom, or your kid’s bedroom, we brought it to you.

E: Do you distinguish between AR and VR? Is there a philosophical difference there?

A: I’ve watched a lot of VR stuff, but there is something about AR that I like a lot more than VR. I like the idea that anyone with a smartphone can try it. It’s not everyone in the world, but it’s a lot of people. You don’t need to have the gear, you don’t even need the little cardboard glasses. If you have a phone you can do it.

I kind of mediate my life through my phone. Being able to walk through an AR experience on my phone, my brain snaps into it. I find it to be equally as transporting as VR, and I like it more because I find the VR hardware to be prohibitive. AR has the ability to map the virtual onto the real in a way that’s really powerful. There’s so much we can do with this. This is just the beginning.

E: What was the production process like? How did the idea change as you started development?

A: When we originally had this idea, I thought, “You go into this kid’s bedroom, and then a bomb explodes.” I thought of it as this 30-second “Oh my god!” thing. But the Nedd crew had the idea of actually telling a story. It’s a mystery, kind of like the movie “Memento”, in a way — the audience has to put together the pieces. You can do this experience many times, and always pick up a new detail. “Okay, it’s a kid’s room. Now they have crutches, now they have a wheelchair. This is horrible!”

[The production company] came up with the idea that this shouldn’t just be just about shock factor. You should care about the kid. It was really the sound effects and visual clues that people, especially parents, found so moving.

Augmented reality has the ability to map the virtual onto the real in a way that’s really powerful.”

E: Was it a big shift for you to move into telling stories in this non-linear way?

A: I’m really fortunate to be working for people who have given us the freedom to chase these ideas, and work outside the box, to move away from these kind of pre-packaged success stories that tend to be common in the industry. I’ve done two or three projects in the last year that have been trying to look at stories in a different way. For example there’s a piece we did called “Syria Street.” It’s stories told entirely through cinemagraphic gifs. It’s not really a narrative, it’s just these portraits of these people’s lives in this little area called Syria Street in northern Lebanon.

E: What has the response been?

A: One of the nice things about this piece is, it avoids the political fray and just drills down to the immediate humanitarian concerns. Everyone can get behind the idea that you don’t want to be in a kid’s bedroom when things get tragic.

The response has been really positive. I sometimes feel like I should put a trigger warning, because it can be difficult for some people, especially parents. But it’s been inspiring for us, because it shows that you can get real interest in a way that cuts through the news, which I think a lot of people have become inured to. It’s heartening to see that we can get people to think about humanitarian issues, and to care about them.

E: It seems like the basic conceit of AR/VR as a medium is that it puts the viewer in the position of being someone else. What is the psychological impact?

A: I hope the feeling of empathy stays with people long-term. Everyone always talks about “empathy machines.” I’m a little dubious of that term. But I hope that there is a real feeling, after you have an experience like watching “Enter the Room”, where you take a breath and say, “Wow, that could be my bedroom.”

We demoed this at Davos, at the World Economic Forum. We showed it to Nick Kristof at the New York Times, and Akon. And across the board at that elite place, people thought it was really special. We also took it to Syria, and Iraq, and the responses were actually very similar. I’ve showed it to people who have actually experienced urban warfare in Syria, and they found it powerful.

What the digital team is doing at the ICRC in many ways is pushing a message of decentralization and delocalization, the idea that anyone anywhere can be a part of this.”

There’s always a fear that you’re going to be exploitative by using the imagery of childhood. It’s always a tricky line. I’m pretty confident that we were able to walk that line without crossing it, in terms of making a piece that tugs at your heartstrings and makes you feel what a lot of people experience even if it’s something you might never experience, but doesn’t make you feel icky and gross. I hope that we’ve managed to keep it appropriate, and also have the audience feel moved by it.

E: Do you think it’s true that AR and VR are empathy-enabling technologies? What are their limitations?

A: I should clarify — I’m not against the idea of an empathy machine. We maybe use the phrase too much, but I use it too! I’m living the cliché I’m deriding. But storytelling is hard, no matter what flashy tech you put on it. Telling a compelling story about a rich character and trying to make it meaningful is hard. The initial excitement about AR and VR has faded; now there is a moment where people are starting to explore what makes for really compelling stories.

One piece I especially liked was the New York Times VR experience where they take you on hajj. It’s such a chaotic space, and it’s something that I will never go to — I’m not a Muslim man, I will never go on pilgrimage. It’s not necessarily “empathy,” but the ability to take you to a place you’ll never go, you actually feel it.

With empathy there is always the danger of being exploitative. That’s always in the back of my mind. But AR can also be very rewarding, and the potential to create moving experiences is really there.

E: What do you see in the near future either culturally or technologically that makes you most excited AR?

A: I read that there are something like 700 million iPhones now in the world. The inclusivity of AR, the ability of anyone to use this kind of tech — that’s exciting.

There is a huge potential for what you can do with AR operationally. Let’s say you were surveying a massive plot of land where you were building a refugee camp. You could place stuff at accurate scale. You could be standing there and showing your team back in New York as you place objects on the space. It’s such an early stage in mobile AR tech, but I’m excited to think about where it will be in a year.

E: What is AR’s potential as a decentralizing technology, as you see it?

A: What the digital team is doing at the ICRC in many ways is pushing a message of decentralization and delocalization, the idea that anyone anywhere can be a part of this. We are interested in being a part of of these conversations about the rules of war, about the unacceptability of torture, the impacts of conflicts on civilians and medical care workers, and on humanitarians. For us, being a part of these bigger networks is important, and totally new. Producing work like this, where we’ve gotten tons of people all over the world to explore these issues, and to share their feelings and engage with us on it, is really exciting.

A video demonstrating “Enter The Room.” Download the app to try for yourself (requires iPhone 6s or above).

Posted by In The Mesh Staff